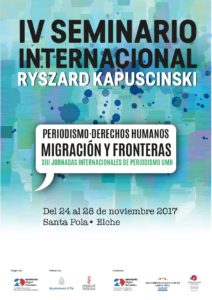 The Vice Rectorate for International Relations at the Miguel Hernández University of Elche is hosting the fourth Ryszard Kapuscinski International Seminar on Journalism, Human Rights, Migration and Borders, which will bring together leading journalists and expert academics on human rights and in conflict zones. The seminar is coinciding with various milestones: the tenth anniversary of the death of Polish journalist Ryszard Kapuscinski, the twentieth anniversary of the founding of the Miguel Hernández University of Elche, and the 75th anniversary of the death of the poet for which the UMH is named after.

Registration: Seminar attendance is free for the public until the seating space reaches its capacity. For university students, the cost is 10 euros and this includes a reserved seat and a seminar diploma that is worth one ECTS credit. You may register here (remember that to complete your registration you must pay the invoice) before November 20, 2017.

The event will also be streamed live.

* The session on Friday, November 24 will be held at the Centro Cultural-Castillo Fortaleza of Santa Pola and its seating capacity is limited. We recommend that all interested persons arrive early to the session to be assured of getting a spot.