UMH Organizes ‘From Students to Professors, Inspiring Women at the European University of Neurotech EU’ Meeting 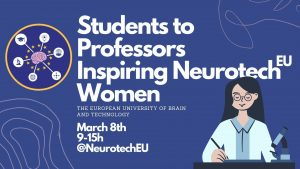 To commemorate International Women’s Day, The European University of Brain and Technology (NeurotechEU), in which the Miguel Hernández University of Elche (UMH) is a founding member, a meeting session is planned that features veteran researchers and students. This activity, in English and open to the public over Crowdcast, is taking place next Monday, March 8, beginning at 09:00 Central European Time. Its aim is to inspire young women who want to direct their careers toward research in neuroscience and neurotechnology, to share experiences, and to discuss policies of equality related to scientific professions.

Speakers in this meeting include the rector of the Iuliu Hatieganu University of Medicine and Pharmacy of Romania, Anca Dana Buzoianu; European commissioners, Sumathi Subramaniam & Gloria Barilari; researcher from the UMH-CSIC Institute of Neurosciences, Ángela Nieto; and Bavarian Motor Works (BMW) engineer, Stella Clarke. Other researchers at different points in their scientific careers are also participating, from doctoral students to heads of laboratories, and hail from the UMH, Radboud University (The Netherlands), Boğaziçi University (Turkey), University of Debrecen (Hungary), Karolinska Institutet (Sweden), and the University of Oxford (United Kingdom).

This meeting will address topics such as European strategies for gender equality within educational and professional training contexts, personal experiences of women dedicated to neurotechnology, and scientific and technical milestones reached by women throughout history. UMH doctoral candidates, Laura Ferrero (Systems Engineering and Automation) and Laura Rincón (Institute of Neurosciences), are organizing this segment. UMH Professor of Physiology, Juana Gallar, is presenting this meeting.

Everybody who is interested may register for and attend this event. This is done via this link, https://www.crowdcast.io/e/students-to-professors/register.

The European University of NeurotechEU is a borderless higher education interuniversity campus dedicated to training future neuroscience and neurotechnology professionals, who are the individuals who will be forced to address challenges related to aging populations and the associated brain disorders and disabilities.